Now you can add Multiple Shortcuts to Taskbar of Windows 7, Windows 8 or even Windows 8.1. Normally the software application Windows which are currently running are displayed in the Taskbar. Windows 7 introduced a new way to pin ann application shortcut to Taskbar with which you can launch any software application. With Windows 8 the Taskbar is almost the same and depending on the number of application you use, your Taskbar may be getting full or it may be already full. The Software Application presented here allows you to Add Multiple Shortcuts to a Single Taskbar Icon using the Jump Lists introduced in Windows 7.

As evident from the screenshot above, you can see that 7 Application Shortcuts have been added to a single Shortcut Pinned to the Taskbar of Windows 7. The Menu displayed in the above screenshot has been invoked by doing a Right Click on the Jump List Software which is not in memory and neither it is occupying CPU Cycles.

The above Screenshot displays the Main Screen of the Software which has been used to Pin Multiple Application Shortcuts to a Single Taskbar icon. Yes Now with the Jump List Software, you can add multiple Application or Document Shortcuts and launch them without opening up the Start menu or Navigating to the Desktop. The above Screenshot displays the default software screen in which 7 Application Shortcuts have been added to a Single Taskbar Icon. 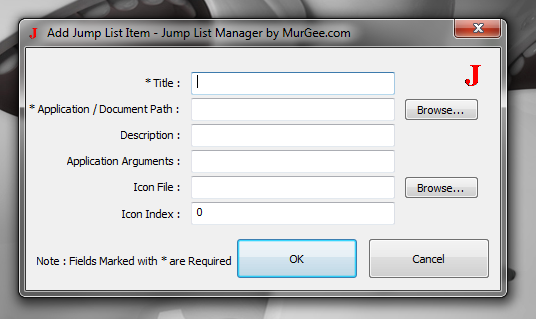 The above Screenshot displays the Screen which you can use to Add Menu to the Existing Jump List menu. Name and File Path are compulsory and must be specified and other parameters of the Jump List menu are read automatically from the Application File Path specified. This Jump List menu can be used as a Quick Launch Menu for Windows 7, Windows 8 or Windows 8.1 Computers.